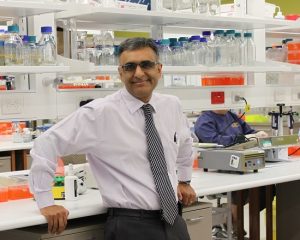 Prof Maher Gandhi and his team were awarded a $2.8M MRFF grant for the new trial. Prof Gandhi will lead the ground-breaking Australasian Leukaemia Lymphoma Group Phase I trial which will use front-line immunotherapy to target the unique viral-immuno-biological features of Epstein-Barr virus-associated Diffuse large B-cell lymphoma.

EBV-associated Diffuse large B-cell lymphoma is a rare and devastating form of blood cancer that has high rates of relapse and very poor survival rates. There is currently no effective treatment against the disease.

Professor Gandhi said that one of the things that always intrigued him was why the immune system couldn’t prevent EBV-associated lymphomas occurring. “I always thought if we understood that, we could design an effective and well tolerated therapy,” he explained.

“Based on our laboratory findings, we tested a few patients with a combination of a small molecule drug called ibrutinib, with EBV-specific T cells,” Prof Gandhi said. “The results were outstanding. This led to obtaining [initial] MRFF funding and performing an early phase clinical trial, called TREBL1 (ALLG NHL31) across Australia.”

Thanks to the ALLG everything went smoothly,” he said. “It was the first ALLG cellular therapy trial conducted. It’s fair to say it was a steep learning curve for me, and I couldn’t have done it without the professionalism of the ALLG. They were amazing.

“This new MRFF funding allows us to progress to another Phase-I trial that brings us another step closer to the clinic,” the Professor explained. “We want to provide a highly targeted but relatively well-tolerated therapy [TREBL2] that eradicates disease and prevents relapse by restoring immunity.”

“The immunotherapy we have developed works in two ways,” Professor Gandhi said. “First, we give an antibody that boosts the immune system, and then we take out some of the patient’s own cells and expand them in the laboratory and then give them back.”

The trial is a collaborative study with the Australasian Leukaemia Lymphoma Group. It is open to patients with EBV-associated Diffuse large B-cell lymphoma and will open in Australia this year [2022].

Memberships
Donations
Participate in a Trial