The ALLG had a strong presence at the ASH annual meeting in Orlando this week (Dec 5-10, 2019). ASH is the world’s largest haematology conference is the key meeting place for the ALLG to not only keep up-to-date with the latest developments, but also meet with international collaborative research groups such as American and Canadian cooperative research groups and many international haematology experts. Raising the ALLG profile by promoting our research and bringing international clinical trials to Australia are key objectives for ALLG Members. 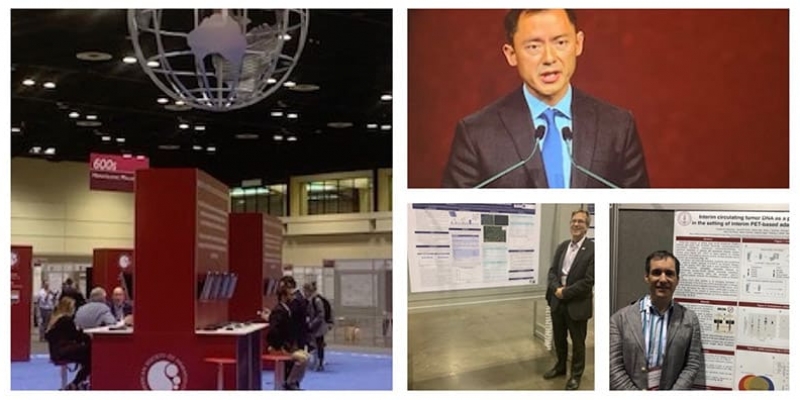 Congratulations to ALLG director, Prof Andrew Roberts, for being named Deputy Editor of the prestigious Blood journal. The American Society of Hematology (ASH) made the announcement about its flagship journal during its annual conference in Orlando this week. Prof Roberts will assume the editorial position in 2020, replacing the current Deputy Editor Dr Nancy Berliner (Brigham and Women’s Hospital, Boston, MA), who will move to Editor-in-Chief upon the retirement of Prof Bob Löwenberg.

Congratulations to the following ALLG Members and their teams who presented ALLG-related research at ASH this year.

Summary: Front-line therapy with blinatumomab in combination with chemotherapy is feasible in adults and results in high levels of MRD response by the end of the first consolidation block with the majority of MRD negative responses attained after the first treatment block. Despite early incorporation of blinatumomab into this treatment protocol, MRD progression was seen in one patient with high-risk cytogenetic abnormalities.

ALLG ALL08 Treatment Schema as presented at ASH2019.

Utilising CyToF, we have identified a novel “NK B cell” population in RRMM patients, with a higher baseline frequency of these cells being associated with a greater likelihood of response to POM LoDEX. Importantly, we have also confirmed the presence of these cells in an independent MM cohort. Moreover, subsequent to POM LoDEX exposure we have demonstrated the enrichment of heterogeneous neutrophil populations as well as an increase in activated NK cells and commensurate decrease in inhibited NK cells. These novel observations may provide new insights into the mechanisms of action of pomalidomide in MM.

Interim Circulating Tumor DNA As a Prognostic Biomarker in the Setting of Interim PET-Based Adaptive Therapy for DLBCL.

Stephen Opat and Charles Macaulay pose in front of their NHL21-related poster at ASH2019.

Summary: Charles Macaulay and Stephen Opat presented work relating to samples from the ALLG NHL21 trial, for which Prof Mark Hertzberg is the CI.

Late in the course of DLBCL therapy, ctDNA carries promising value as a biomarker for stratifying predicted patient response to therapy as evidenced by additional detection of additional 50% detection of relapsing cases not categorized as iPET-positive. Data from additional patients and relationships between ctDNA response as measured by EMR (C2D1), MMR (C3D1), and C4D1 will be presented at the meeting.

Andrew Spencer and Delaine Smith smile for the camera at the MM17 poster at ASH2019.

Summary: These preliminary data confirm the utility of QIP MS and FLC MS for the sequential monitoring of tumour burden in HR MM. Concordance with standard monitoring was good with MS detectable disease in some patients with serological sCR/CR consistent with the higher sensitivity of MS. Concordance with NGF was only fair to moderate mandating the future comparison of larger sample sets to better understand the relationship between the 2 methodologies.

Summary: Here we demonstrate that cell surface expression of GRP78 is prominent in both the plasma cells and cells of the tumour microenvironment in patients with RRMM and persists in the TME cells in patients on treatment. Early (<6mo) disease progression or mortality is associated with higher baseline intensity of global cell surface GRP78 expression. Additional studies are being performed to evaluate the promise of cell surface GRP78 expression on plasma cells as a potential biomarker of response to therapy.

Summary: Albeit with considerable toxicity and early mortality, Ibrutinib-R mini-CHOP is a deliverable and effective treatment for most pts ≥75yrs with DLBCL. While longer follow-up is required to assess our primary efficacy endpoint of 2yr overall survival, this promising response and reassuring QoL data highlights the merits of ongoing study to identify deliverable and effective treatments for DLBCL in the very elderly.

Combination of Nilotinib and Pegylated Interferon Alfa-2B Results in High Rates of MR4.5 at 24 Months – Primary Analysis of the ALLG CML11 Pinnacle Study.

Summary: Combination therapy with NIL and Peg-IFN leads to favourable rates of molecular responses that may be superior to NIL monotherapy. While the majority of patients did not durably tolerate full dose Pegintron, there was minimal interference with TKI dose intensity. Such strategies may maximise achievement of deep molecular response, allowing a trial of TKI cessation and the benefit of treatment free remission to an increased number of patients.

A/Prof Andrew Wei, Chair of the ALLG’s Acute Leukaemia Working Party and Ambassador for the National Blood Cancer Registry (NBCR), spoke at the Friday Satellite Symposia about “Data + Perspectives: Exploring the Role of Novel Agents and Emerging Strategies in the Management of Acute Myeloid Leukemia” and delivered a late-breaking abstract presentation at ASH in Orlando on the CC-486 (azacitine oral formulation) for acute myeloid leukaemia in first remission.

A/Prof Andrew Wei presenting to the ASH audience in Orlando.