Janey Stone – a celebration of 28 years at the ALLG

Every year, hardworking people dedicate their lives to saving others. One such person is Janey Stone, who dedicated her life to science. 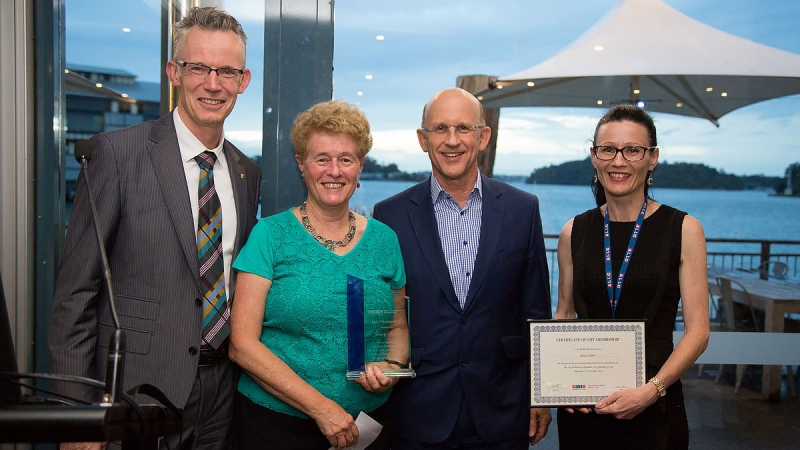 With a career spanning 50 years, 28 of those with The Australasian Leukaemia & Lymphoma Group (ALLG), Janey is a champion of science, whose work has made a significant contribution toward improving human health.

During Janey’s official retirement celebration, ALLG’s CEO, Delaine Smith said many of us would only have the opportunity to attend a handful of retirements in our working lives, so to celebrate an employee of 28 years is truly exceptional.

“A unique person in so many ways, it is hard to do justice to your amazing career and the tremendous amount of work you have given to the ALLG”.

Janey’s career began with the Department of Biochemistry at the Royal Women’s Hospital after graduating from the University of Melbourne in 1967.

By 1973, Janey was working with Max Whiteside, a Melbourne pioneer of clinical trials, in the Pathology Department of the Alfred Hospital. Janey saw the first generation of adults with AML achieve remission, this in itself an outstanding medical achievement of the day.

During the 1980’s, Janey diversified her skills as a services officer with the Commonwealth Department of Employment, Education and Training. These eight years would give Janey the skills needed to pioneer what would become the core ALLG national training program for the Associate members — data managers and research nurses.

Jane Matthew invited Janey to join PMCC in 1989, as a trial coordinator working alongside Fiona Page. She was responsible for the ANZLG and lymphoma trials, while Fiona (and later Heather Baxter) worked on the ALSG and leukaemia trials.

During these years, Ian Cooper was highly influential. Janey Stone said he encouraged and supported her by introducing the side of haematology she came to love.

“He was always a delight to collaborate with despite his heavy workload; he always found time to help me with queries”, she said.

Pronounced as her greatest achievement, Janey believes out of the 35 trials she managed, it was NHL7. Published in 2014, the NHL7 report outlined Janey as the third Author.

Over the long haul, Janey and Max Wolf formed a review panel, which reviewed the stage, extra-nodal sites and response status of all patients.

“This led to me developing a higher than usual level of expertise in Lymphoma, particularly in staging”, said Ms Stone.

This expertise enabled Janey to contribute at high level to future trials, and became a beacon of disease and trial enlightenment to PIs of subsequent ALLG lymphoma studies.

With increased knowledge, Janey was in a strong position to drive new work for the ALLG from administration, to finances, contracts and budgeting. Self-taught in everything from intellectual property rights to event management, Janey became the backbone of the ALLG.

Formally appointed as Executive Officer of the ALLG in 2005, Janey was able to focus exclusively on ALLG administration. Janey’s first “fun” experience in this role was the NHMRC grant application that resulted in ALLG’s first infrastructure funding. Highly adaptive to any situation, Janey did so well in everyday business that she set the foundations for every role with ALLG has today.

Delaine Smith continued, “When I joined the ALLG in 2008, it was an absolute delight to meet Janey”.

“I welcomed her knowledge and experiences and have for all these years been very glad of a shoulder to lean on, likewise for other staff members — Janey has always been energetic to help and guide”.

Janey is renown amongst the members as the driving force of the ALLG.

“It’s not just focus and love for the ALLG members, Janey dedicated her career of 28 years’ to the members and it is more than a job well done, it is loyalty, commitment and reliability”, said Ms Smith.

“If Janey hadn’t initiated the opportunities and put in the heavy lifting and long hours back in the late 90’s early 2000’s then we simply would not be the ALLG we see today”.

Thank you Janey from the depths of our hearts, for saving lives, silently behind the scenes, to improve the lives of people with blood cancer.