We are pleased to announce that Prof Harry Iland, AM MBBS FRACP FRCPA MHGSA, has been awarded Life Membership with the Australasian Leukaemia & Lymphoma Group (ALLG).

Life Membership of the Australasian Leukaemia & Lymphoma Group (ALLG) recognises a person who, in the opinion of the ALLG Board’s, has made a sustained and significant contribution to the ALLG organisation. Prof Iland is certainly a deserving Life Member of the ALLG.

A Senior Staff Specialist at the Institute of Haematology, Royal Prince Alfred Hospital (RPA) in Sydney and Clinical Professor in the Faculty of Medicine, University of Sydney Prof Iland has made a sustained and significant contribution to the ALLG and the patients it serves.

After graduating from the University of Sydney’s Faculty of Medicine and completing training in internal medicine and haematopathology at Sydney Hospital, Prof Iland completed haematology training as a Research Fellow at the Duke University Comprehensive Cancer Center in North Carolina. He concentrated primarily on the myeloproliferative disorders in conjunction with the Polycythemia Vera Study Group. After returning to Australia, he was appointed as a clinical and research haematologist at the Kanematsu Laboratories and the RPA Institute of Haematology.

Over and above these considerable achievements, Prof Iland’s most significant contribution is through his major clinical and laboratory interest in APML. He has been responsible for oversighting the ALLG’s clinical trial program in APML since 1997. This has been carried out in wide-ranging collaborations with researchers, scientists and clinical staff throughout Australia and internationally.

When APML was first described as a distinct entity in 1957, it was regarded as the most malignant form of acute leukaemia. However, following recognition that it is uniquely and exquisitely sensitive to a drug known as all-trans retinoic acid (ATRA) and also to arsenic trioxide, treatment protocols were developed that transformed APL into the most curable form of adult acute leukaemia. The outlook for patients with this condition changed almost overnight and clinical trials contributed to this extraordinary success story. 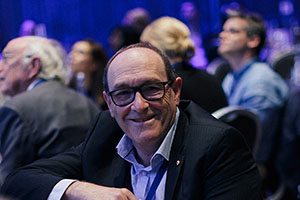 Prof Iland has been the key driver of recent ALLG trials, which have helped to define the best combination of drugs to ensure successful outcomes for those with APML. As a result of these trials, today the disease has a cure rate of almost 95%. This is in stark contrast to the poor outcomes seen with conventional therapy, which is highly toxic and has been associated with significantly higher mortality (more than a third of patients on this earlier therapy died).

Thanks to Prof Iland’s tireless efforts the outcome of ALLG APML04 was a resounding success. When published 2012 in Blood, the most prestigious medical journal in the field of haematology, the trial was featured on the cover of the issue and was the subject of an editorial.

Prof Iland has defined current clinical practice for APML through introduction of ATRA (ALLG APML03 trial) and arsenic (ALLG APML04 trial). It is as a result of these trials that the disease has a cure rate of almost 95% and is why the new treatment regimen (ATRA combined with arsenic trioxide and idarubicin, a conventional chemotherapy drug) is now recommended for the treatment of high-risk patients by the prestigious US National Comprehensive Cancer Network, and is the subject of guidelines published by a Canadian panel of APML experts. Since the new guidelines were published, the treatment protocol defined by Prof Iland has now been adopted in haematology and oncology centres and teaching hospitals around the world.

Further work by Prof Iland and others is underway at the ALLG and elsewhere to develop even better treatments for APML. A major goal for future regimens is to simplify arsenic trioxide administration (e.g. replace intravenous administration with an oral formulation) and potentially reduce its toxicity. The new ALLG APML05 clinical trial, currently in progress and spearheaded by Prof Iland, is investigating this in both standard-risk and high-risk patients. Creating and maintaining the “buzz” of international interest in improving APML treatments is a major accomplishment of Prof Iland. During this time, Prof Iland has also championed the rational incorporation of molecular testing into leukaemia clinical trial protocols, which is helping clinicians optimise prognostication and minimal residual disease (MRD) detection.

We are proud to welcome Prof Harry Iland as an ALLG Life Member.