Professor Michael Pfreundschuh, one of the leading experts in the world of Lymphoma research and treatment, sadly passed away on March 5th 2018. Over a career spanning nearly 40 years, Professor Pfreundschuh was a committed physician scientist who made significant advances in understanding the biology and improving the treatment of blood cancers.

Professor Pfreundschuh earned his Medical Degree at Heidelberg University in 1975. For two years, he was a clinical fellow at the Memorial Hospital and a research fellow at the Memorial Sloan Kettering Cancer Centre in New York. Having completed his training in internal medicine and oncology/haematology at Heidelberg University and Hannover Medical School, he became an Assistant Professor in 1984.

In 1987, he was appointed as an Associate Professor at Koln University and in 1991 was elected as Director of the Department of Internal Medicine and Professor for Internal Medicine at Saarland University Medical School. He was founding member and chairperson of the German High Grade Non-Hodgkin Lymphoma Study Group (DSHNHL), and a Founding Member of the Academy of Cancer Immunology since 1998.

In 2016, Professor Pfreundschuh was awarded a Federal Cross of Merit from Minister President of Saarland, Annegret Kramp-Karrenbauer, in recognition for his outstanding contribution to medical research. His other awards included the William-B. Coley Award for Distinguished Research in Basic and Tumour Immunology in 2000, and the Warner Award for Cancer Research in 2004.

CEO of the Australasian Leukaemia & Lymphoma Group (ALLG), Delaine Smith said the news of his passing came as a shock to many members of the ALLG.

“Prof Pfreundschuh was an outstanding scientist and doctor and an equally highly regarded around the world as he was in Germany”, Ms Smith said.

Chairperson of the ALLG Scientific Committee, A/Prof Peter Mollee continued, “It is with utmost respect and admiration that we acknowledge his great achievements as an outstanding Doctor and leader of the German High Grade Non-Hodgkin Lymphoma Study Group.”

A highly renowned national and international doctor, he was also a dedicated researcher spending uncounted hours in the laboratory and in the clinic. In the one person, he combined the great intellect of an outstanding scientist with empathy and sensitivity in all his interactions with patients.

“Many people owe their lives to his clinical capabilities in the area of haematology/oncology and his outstanding efforts as a researcher have influenced the treatment of cancer patients worldwide.”

Professor Pfreundschuh was a great friend to the Australian and New Zealand haematology community. He very much enjoyed his visits to Australia and willingly gave his time to clinicians as well our patients via support group meetings. As a clinical trial leader, he saw collaboration as a high priority, always reaching out to include global colleagues in new research and in generously sharing his research findings.

Professor Mark Hertzberg noted, “No words can adequately express our sadness at his passing, and our gratitude to Professor Pfreundschuh’s inexhaustible energy and creative power. He will be sadly missed.” 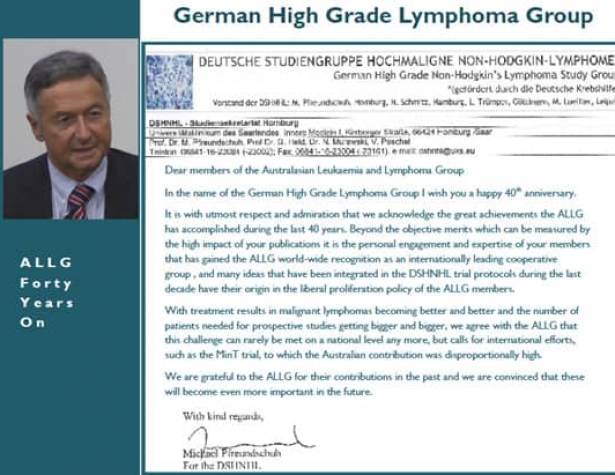